Things get old--and new again!--so quickly in these times of advanced printing and internet technologies. Back in early 2006, I wrote a series of poems where I basically copied the text of responses to mail order bride/sweetheart notices and just reconfigured them into couplets (a sample is available HERE; the series is available HERE). At one point, I submitted the series to a potential publisher; however, the publisher replied that while they found them interesting they wished I'd done more with the raw material (e.g., tinkered with the text).

Well, fast forward to today and several projects are creating poetry (that some might limit into "conceptual poetry"--personally, I don't believe in said limit) by using 100% found text. The latest example to dance its way into my In-Box is

2ND NOTICE OF MODIFICATIONS TO TEXT OF PROPOSED REGULATIONS, REGULATION AND POLICY MANAGEMENT BRANCH, CALIFORNIA DEPARTMENT OF CORRECTIONS AND REHABILITATION

Basically, the work is a document that the poet received as a .pdf. After printing it out, Bloomberg-Rissman then slapped a cover 'round it and ... a poem was born! The document was a text that was modifying regulations on how the death penalty is to be administered in the state of California.

Because this was an editing document, it contained various editing formats, like the underline indicating added text and the indicating deleted text. Based on just the first page, the editing changes offer much of what's poetic about the document, I mean, poem. For example, at one point, "person" was deleted and replaced with "inmate". A possible interpretation could be how "inmate" allows for a distancing effect from the "person" soon to be killed.

When the word "warden" also was edited to reflect the capitalization of the first letter into "Warden," it gives additional weight to the role of said Warden.

One doesn't have to rely on those parts of the text that are being edited. Just this sentence, copied a hundred percent and presented forthright, bludgeons with no other needed ornamentation:


Inmates sentenced to death shall have the opportunity to choose to have the punishment imposed by lethal gas or lethal injection.

If one goes through the rest of the poem beyond the first page, I'm sure one can come up with other effects that existed without any need of aid by the poem's author, John Bloomberg-Rissman. The concept, of course, is not new--occasional Galatea Resurrects reviewer Steven Fama notes about a similar project also released this year:


"Tragodía – 1: Statement of Facts, by Vanessa Place... is in one sense, and perhaps mostly, a conceptual work: its text is entirely borrowed from another source and presented as poetry essentially as it was found. Such appropriation and re-purposing is a well worn and easy trick, especially in visual art (see Marcel Duchamp’s Bottle Rack, 1914/1964)...


I get the concept and I appreciate it (after all, I've done it!). But the thing with concepts is that one can appreciate it, as I do in the case of 2ND NOTICE..., without needing to immerse one's self in actually reading every word of the manifested poetry project. In the case of 2nd NOTICE..., I wrote the first draft of this review without bothering to read the rest of the poem after the first page. There's a concept to this project and my "review" relies on the concept.

Do I shortshrift 2ND NOTICE... by not reading the whole thing before writing up 95% of the review? You can judge me by writing a review of it; a review copy is available through Galatea Resurrects! Anyway, there's a concept to this project and my "review" relies on the concept. I actually admire said concept--my take on it, as I've blathered numerous times elsewhere, is that Poetry exists all around us, and the role of poets can be just one of recognizing what already exists vs. a more interventionist authorial act.

It should be noted, though, that Bloomberg-Rissman seems to suggest that 2ND NOTICE... extends the genre of art being created through recognition/finding. The cover of 2ND NOTICE... presents three statements and its authors underneath :

The above are replaced by

"TO THOSE WHO SAY, 'THIS ISN'T WRITING, IT'S TYPING', i SAY, 'NO, NO, NO, THIS ISN'T TYPING, IT'S JUST DIGIMECHANICAL REPRODUCTION; ITS NOT EVEN CUT N PASTE'."
--John Bloomberg-Rissman

Now, I've said I admire the conceptual underpinning. But where does it get tired? At the point of 2ND NOTICE... which is a received .pdf sent to a printer and then covered by a cover? (Note that Bloomberg-Rissman didn't want to lose even the original formattings of the document.) But of course it all depends on what is done with the concept. For instance, the choice of which text to "find" into a poem is an authorial decision that matters. Indeed, at this point of this review, I decided to open the book randomly. That it opened to a page that contained this passage (as regards the "Administration of Lethal Injection Chemicals")

If the inmate continues to refuse to comply with orders, an emergency cell extraction will be authorized.

attests to the power of its words (an "emergency cell extraction"?! ) and why 2ND NOTICE... is worth increased attention through having been made a conceptual poetry project. Or, on the same random page, check out this passage that could certainly be a list poem as regards precautions that staff is supposed to take while administering lethal injections:

Like a poem, what's described here is a different world, and it is ours, even that of ye proverbial nuclear family sitting all cozy in their warm living room.

A fabulously effective part of 2nd NOTICE... is actually the back cover, which reproduces a drawing by Rebekah May of what Bloomberg-Rissman described as "a child's version of an execution." To wit: 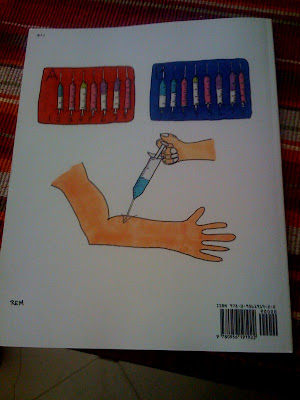 The root of the illustration is 2ND NOTICE...'s description of the trays presenting lethal injection chemicals and salines:

(1) Two identical trays shall be prepared.

(A) Tray A shall be color-coded red and will be the primary tray used for the lethal injection process.

(B) Tray B shall be colored-coded (sic) blue and will be the backup tray.

(2) Each tray shall have eight color-coded syringes to match the tray and be labeled by content and sequence of administration as follows:

Though May is visually representing the A and B trays of lethal injection ingredients, I also appreciate how the trays, by being labeled with the letters "A" and "B", can imply that what's being injected is text into the author's (writing) arm. It's aa result certainly befitting the project's underlying concept.

It's a nice drawing (done with markers) by May that, for me, elevates the project beyond being another "found poetry" work -- I'm happy to see the presence of her hand (pun intended), versus, say, a xeroxed image or collage of xeroxed images. And it's a paradoxical ending by reminding the viewer/reader that conceptualism is just one way. For the one conceptual failure in art-making is the insistence that its way is the only path.

Eileen Tabios does not let her books be reviewed by Galatea Resurrects, but she is pleased to point you elsewhere to reviews of her books. Her newest book THE THORN ROSARY: Selected Prose Poems & New (1998-2010) is reviewed by Amazon top-notch reviewer Grady Harp over HERE, William Allegrezza over at p-ramblings HERE and by Leny M. Strobel at Moria Poetry HERE. Mr. Harp also reviews her NOTA BENE EISWEIN over HERE. If the former book gets you curious, please note that its publisher Marsh Hawk Press is supporting a fundraiser for Haiti relief by giving a free copy if you order at least $15 worth of booklets through the Hay(na)ku for Haiti fundraiser; as THE THORN ROSARY is priced retail at $19.95, this is one of the best bargains in the poetry world, even as it helps out with a Haiti fundraiser.
Posted by EILEEN at 9:00 PM

Another view is offered by Richard Lopez in GR #15 at