[Editor's Note: The text below is based on a conversation with my son, Michael Pollock] 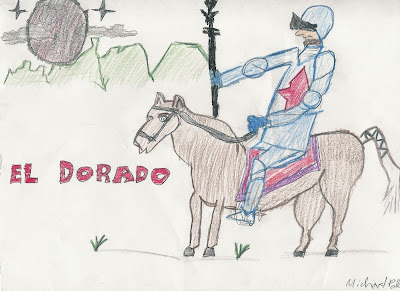 Michael liked the poem in that, in his view, it counsels that regardless of continuous failures, one should keep trying -- keep moving forward! Thus, the knight in the picture, despite a wrinkled chin bespeaking old age, sits straight (as straight as he can) as he continues to urge his horse to continue moving forward. Note, too, how the star emblazoned on the knight's chest mirrors the stars in the distance, symbolizing how he ultimately will be one with his goal.

Michael Pollock is in 8th grade. The son of Galatea Resurrects' editor, he is being raised with the idea that poetry is part of everyday life.
Posted by EILEEN at 9:50 PM