“I had a wish to determine what I was”
--Jasper Johns

The cover of Anne Gorrick’s new book of poetry, I-Formation, is a photograph of an encaustic and pastel work by Gorrick herself, entitled “After Usuyuki,” which refers to Jasper Johns’ series of prints, “Usuyuki,” which consist of crosshatch marks on a grid-like surface. 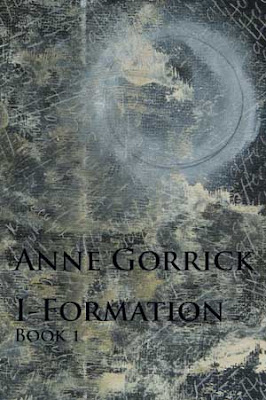 The image on I-Formation contains the text, “after Usuyuki,” handwritten over and over again in a crosshatch pattern across what appears to be a weathered surface. The print has some kind of screen or fabric texture embedded into the surface as well, and the piece is richly smudged and blurred. The image accurately captures the multi-layered pentimento-like density of the 87 pages of poetry within.

The book contains two long pieces. The first serial poem in the book, “Her Site of Reversible Destiny,” consists of nine sections spanning from “The February Garden” all the way through “The October Garden.” The poems are visually comprised of block-like stanzas of text, with the margin depth alternating every other stanza. This creates a woven appearance. Starting in the 3rd section, the page patterning becomes even more intricate when a series of vertical-type stanzas consisting of only a few words sprout up to the left of the more deeply indented stanzas. The visual form of the poem organizes the words on the page so that the reader is immediately encouraged to read the text in several simultaneous versions. The poem might be seen as:

The garden at work on the idea of itself
Each year, filled with a metric ton of necessity
the distances measured in arm’s lengths

The poet is working with language as if it were gardener’s soil: turning it, sorting out stones and setting them aside, deadheading, and letting blooms occur in unexpected places. Repetition, used elegantly, is key to this poem, and functions as a kind of sonic cross-hatching. Phrases and words might reappear several times, not at all chant-like, but in new combinations, as the poem composts and renews itself into organically hybrid phrases and lines.

The language is lush:

and the imagery is surprising, rich, and mysterious:


The He is tall, next to a white car underneath a red pine
swallowing 300 Thalias

“Her Site of Reversible Destiny” is reminiscent of certain kinds of encaustics wherein layers and layers of beeswax of different degrees of opacity are fused together so that the artist’s intention is recorded, as it changes, and what a viewer (or reader) is left with is a kind of semi-translucent layering of versions and rewritings that cross (hatch) over the surface of time. This allows the reader to see how the poet’s mind works, making it a real delight, particularly for other poets, to read.

The second grouping in I-Formation is a fabulous series called “The Michelangelo Variations” that begins with a poem called “Pieta,” and these lines, defining the poem’s intention from the outset:

Mother wrap us in your thorns
sentence is open ground

A dialect of flesh

The “Variations” uses a vast array of material for its fodder, including the creation myth, Michelangelo’s sculptures, car racing, and the natural history of the Hudson River Valley. It’s a wild, fluid, fast-moving, and wonderfully intense poem. The stanzas shift from single to double-spaced in such a way as to give the poem the appearance of breathing. Sections of powerful prose are inserted into the poem as well:

The theatre of panic and panic itself. Leave things behind. Tree of indifference, tree of hope. The needling green, the complicated arms. And the sky, an exploited ruin, a paint can in the fire: char, rust, gas. Wax the cerecloth. Wrap the dead and place them up there to burn.

She is a stagnant shape of wind. She is ancient movement trapped. Stand where the limb meets the trunk, back against the trunk as if looking out a window. There are monkeys everywhere, grey and familiar childhoods swinging around fat limbs, until one becomes trapped upside down and the others rescue it. A man says, “why don’t you try it?” She can’t. They must get down he says. They can’t. So they jump. She feels her pelvis disintegrate. She is in the grass now, smiling because she can’t believe she’s alive and recently fucked.

The poem is instructive, exciting, and at times reads as ritualistic and even oddly tribal:


Science of fluids in motion

Cut the heart from the barn owl

Place it to the left of the sternum

There. She will tell you everything

—and she will tell you everything. I-Formation is an intelligent, lovely, strong book of innovative poetry, well worth the read. You can download a PDF sampler excerpt here, check out Tom Beckett’s review of the book here, and buy it here.

Keep your eye out for I-Formation, Book 2, to be published by Shearsman in 2011.

Lynn Behrendt is the author of The Moon As Chance, Characters, Tinder, Luminous Flux, and, soon to be released by Lunar Chandelier Press, petals, emblems. She co-edits the Annandale Dream Gazette, an online chronicle of poets’ dreams, as well as Peep/Show Poetry, an electronic publication of innovative contemporary poetry.
Posted by EILEEN at 8:05 PM

Other views are offered by Allen Bramhall in GR #15 at

and Eileen Tabios in GR #15 at